Sprinkles are for Winners....

The Victory Vixens, my team, for the Kansas City Roller Warriors, has pulled off the impossible.  We climbed the impossible hill.  We were doubted the entire season and this past game.  We did it though.  We went from last place to playing the Rink of Fire for the Warder Cup in July.

The Vixens, we struggled at the beginning, but we finally got our stuff together.  We kept losing at first, we didn't lose by very much, but it was still a loss.  We started Saturday nights game 1-4, technically in fourth place according to wins/losses.  Third place if we did points, but that doesn't come into play until teams are tied.  We won our game on Saturday.  We had to win by a significant spread to play in the Rink of Fire.  We had to win by 97.  We won by 102.  Next month, on July 20th, we are fighting for the trophy. 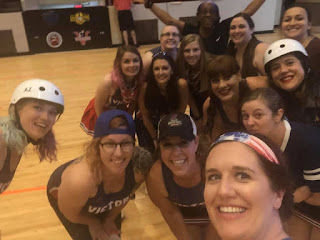 Before the game, we've been doing fun things.  In May, we played a bunch of games and laughed so hard.  Before this game, we played with a large red/white/blue beach ball.  We used it for our intro, too.  Just playing ball and waving to the crowd when it was our turn to be introduced. 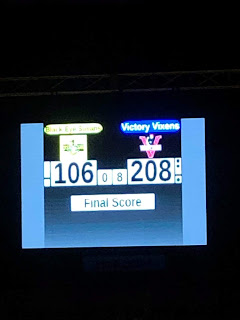 I'm off skates because I fouled out in the last five minutes of the game.  I was killing it.  When you kill it and play a lot, you get a lot of penalties.  When you foul out, you have to gear down before you can return to your team. 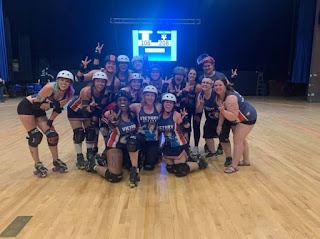 The one in the red helmet is a medical student and has been studying in Romania and Liberal, KS this summer.  She drove lots of miles and lots of hours to play in the game.  I am so glad she did.  Every team member is a valuable asset. 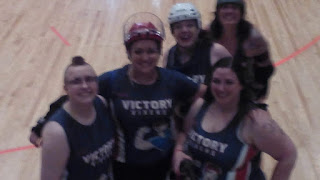 I had already purchased Ice Cream and toppings for my team.  One of my teammates had a birthday this past week and I asked her what kind of dessert she liked and she said ice cream.  So, I did a whole sundae bar thing.  I got sprinkles.  Sprinkles are a big thing.  Because sprinkles are for winners.  Sprinkles were everywhere! 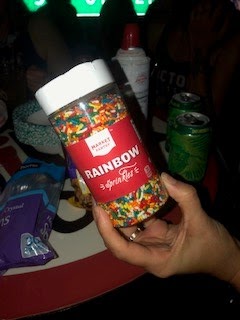 Ice Cream Sundae's at the bar!  It's a thing.  It was delicious.  I love this little bar, they let us bring it food and fun and really don't care what we do.﻿ 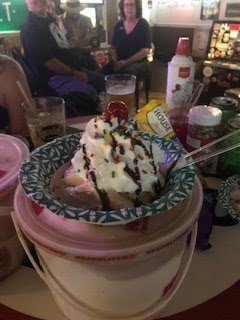 Posted by Morgan Cartwright at 11:11 AM