Alli, Clara and I went to the Prairie State Park for a First Day Hike.
Prairie State Park is in the southwest portion of Missouri.  It contains almost all of the remaining prairie left in Missouri.  Prairie used to cover 33% of Missouri, now it is down to 0.5%.
We went to go see the American Bison.  There is no buffalo in Missouri, we are totally on the wrong continent to see buffalo.  You would have to travel to Asia or Africa to view those wonderful creatures.  The First Day Hike provided for a Naturalist to lead the Hike to find the Bison.
There was a large group of people who showed up.  Not surprising, it was around fifty five degrees out.  Perfect temp for a hike.
We started up the prairie.  Once we rounded the first turn, we could see four bison in the distance.  One small, one large and two medium ones.
The Naturalist then discussed the biodiversity in the area.  How there are only 100 native prairie chickens left.  How the farms that are in the area have destroyed the prairie lands.  How everything comes with a price.
He also found an owl pellet and pulled it apart.  There was an intact mouse skull that was amazing.  I pulled apart an owl pellet later during the hike, mine had gotten smashed though.  Yes, I used my bear hands to pull apart owl puke.  Hands are washable and totally a teachable moment.
Toward the end of our hike, we did find a herd of bison of around 11.
They kept getting closer to us as we watched.

Did you participate in a First Day Hike?  Where did you go?
What did you do on the first day of the New Year? 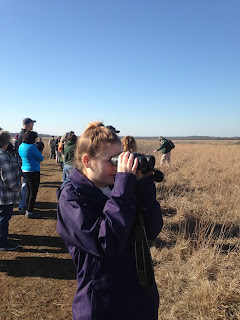 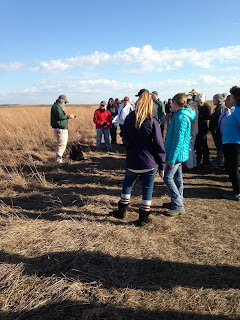 Posted by Morgan Cartwright at 8:10 PM