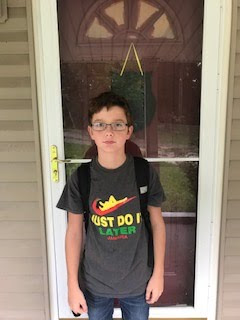 Sixth Grade:  Peyton is going into the Sixth grade.  I remember going into sixth grade.  Being in sixth grade meant we were at the top of our school.  I went to the same elementary school from Kindergarten to Sixth Grade.  I watched during all those years the things the sixth graders got to do.  We had our own separate field day and helped with the younger grades during their field day.  We went to Wildwood camp.
I ended up in Mr. Nerstheimer's class.  He was a first year teacher, but a lot of us sixth grade girls knew him as the cute camp counselor that took his charges to the pool.  Yes, this is a true story.  We all fawned and adored over him.  Then, a lot of us found out we were going to be in his class.  Gasp.  He might have been cute, but he could be a butt of a teacher at times.  I guess all teachers can be that way.  The year turned out great and we were finally out of elementary school!  Mr. Nerstheimer is a librarian at a private school now.  He has been in education a long time because I was in sixth grade a long time ago. 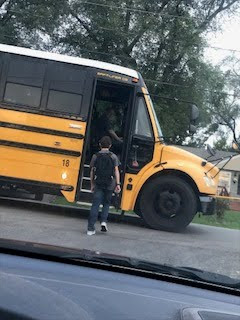 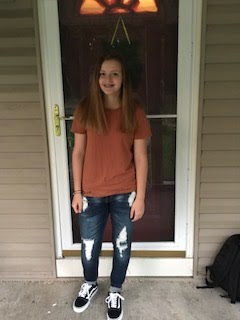 Eighth Grade:  Alli is going into Eighth Grade.  I had a very strong dislike for middle school.  Middle school is just that horrible period of time where there are too many transitions.  I went to Hocker Grove Middle School.  It was also known as Hooker Grove because there was a lovely trailer park right next to it.  And no, I'm not saying that all hookers live in trailer parks or all people who live in trailer park are hookers....but...
I purposely made on of my teachers mad by wearing a certain T-shirt.  Back in the day, there were coed naked t-shirts.  I had a coed-naked volleyball shirt and I thought it was the most hilarious thing.  I would wear it to school to see how long it would take this one teacher to notice.  Sometimes she did and she was furious and other days she didn't.  I was doing scientific inquiry.
I somehow survived my eighth grade year.  I won a couple of awards, which I was truly shocked about.  I was more than happy to tell that place to go away forever.
Senior Year:  Tanner is going into his Senior Year of High School.  I graduated early so I only had to survive half of a year of school.  I had enough credits to graduate early and did a correspondence class to finish my last .5 credit of English.  I loved not having to go to school everyday and just having to go back in May to graduate.  It was easy and simple.  I'm sure nobody even noticed I was gone, I tend to blend into my background.  And of course, I do not have a picture of his first day of school. :(

P.S.  I guess I'm a crap mom since I didn't post these pictures on social media.  But hey, they are here.  Where they should be.

Posted by Morgan Cartwright at 10:44 AM