I got skillz yo

Once upon a time...in 2012...I decided to give that derby thing a try.  I showed up at every training session.  Training back then wasn't like training now.  It was "I'll show you this skill, then you do it and I give you a score"  My first attempt at a plow stop: Fell directly on face.  My second attempt at a plow stop: Fell directly on a cone. I eventually mastered that skill and passed.  I passed on all of my skills.  Endurance was a pain though.
Endurance.  It almost held me back from being drafted and playing on a team.  Endurance is where you have to skate 20 laps in a specified amount of time.  The times have changed from years past.
My first timed endurance attempt. 6:32.  Not good.  It was suppose to be 5:00 and under in 2012.  I had a lot of work to do.  We didn't get to practice a whole lot. I remember this one horrible, horrible practice.  The whole time we did ladder sprints.  They were terrible and horrible ladder sprints.  1 lap, do 10 situps, 2 laps, do 10 situps, 3 laps, do 10 situps, etc... up to 20 laps. And we went back down.  I didn't even make it to the 20 laps.  It was horrible.  Did I tell you, it was horrible?  I felt like I had completely wasted my time going to practice.  It wasn't helping me.  It was making me frustrated and upset.
Come my second endurance attempt: 5:32.  A minute off.  But still not enough.
Third Attempt: 5:12
Fourth Attempt: 5:07
Fifth Attempt: 5:04
Sixth Attempt: 5:02
Seventh Attempt: 5:01  WTF?!?  Why was I torturing myself....
Eight Attempt: 5:00!  Finally!!  On the second to last testing day!!
I, honestly, don't know how I did it.  The last three attempts were all in the same night.  My legs were jelly.
I was drafted to the Sheilas.  A complete and total surprise to me.  I had no idea they were even looking at me.

My first year of derby ended with CCRE.  I loved it.  I had so much fun with my friends.  II learned things, I played derby with people I didn't know.  I was at the beach.  It stayed out all night long.  I can't wait to go again.  Next August. :)


My second year of derby.
Skills testing.
Redo all of them.
Endurance had changed.  Now, it was 20 laps in 4:30.
I got 4:29.
On the first try.
Right after I completed skills testing, I fell.
No, not in derby.
Out of my moms front door.
And my ankle went "pop"
and it swelled.
It was not pretty.
It was not broken.
Just sprained.
It healed fairly fast.
But it freaking hurt!
It didn't stop me from participating in the mashup in Benton County!
I love mash ups!  You get to play with people you really don't know.  The best thing is, they also don't know you!
I had three other Sheilas on my team there.
It was a long drive though. 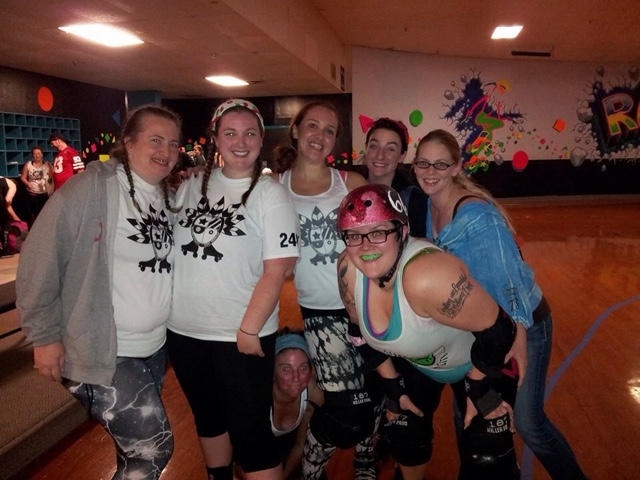 I went to Beat Me Halfway the first time that year too.  November was a busy derby month.  Beat Me Halway is fun.  That year it was in Lebanon, Missouri.  Out in the middle of nowhere Missouri.  I learned a few things, but it was mostly WFTDA.  I sometimes enjoy watching WFTDA, but I don't enjoy playing it as much.  It hurts a lot worse to be hit from a stand still.
My second year of Derby, I also coached one of the Zombie teams.  Little did I know, I would be playing with them a whole lot.  They changed the roster numbers that year.  That's all I want to say on that.  The year was very hard for me.  It didn't break my spirit though.
Fountain City Roller Derby also debuted their coed teams that year.  I was drafted to the Public Enemies.  We lost every game.  It was hard.  For more reasons than one.
Third year!  Endurance qualifications changed.  Again.  This time it was 20 laps in 4:30 for Zombie League.  4:15 for class 2 (house/coed) and 4:00 for class 1.
First attempt was 4:12.  I was good to go for the year.
I did test it again a couple of months later and got down to 3:56.  That was during travel team try outs and I pushed it really hard.
At the beginning of the season, I played in a lot of Zombie games.
They were fun, but I was mainly frustrated.
I went back into the draft for coed.  My new team, The Usual Suspects! 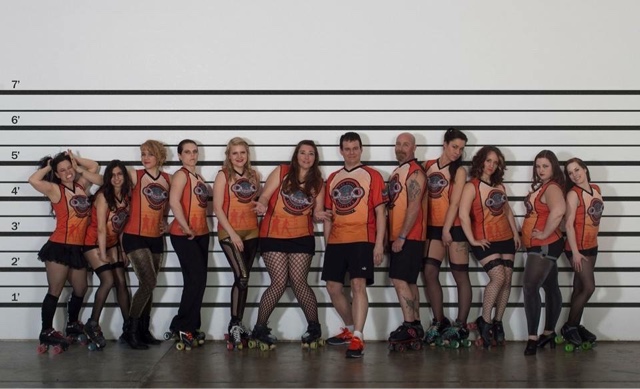 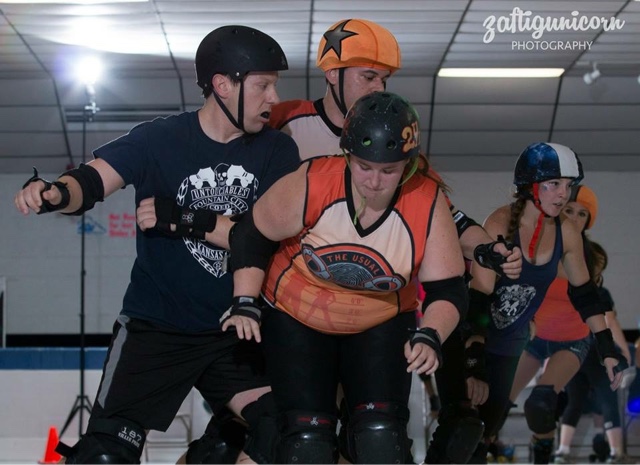 Now, I'm getting ready to start my fourth season.
Endurance passed at 4:00.  After a week and a half of not skating. (So worth it)
They changed testing.  We didn't have to do everything over.
Thank goodness.
Two scrimmages this week and then draft night on Saturday.
Good luck to all the Newbs.
Posted by Morgan Cartwright at 3:09 PM