It's so cold out.  When I took Alli to school this morning, I was taken back at the bitterness when I stepped out the door.  I get it, it's winter, it's cold, but it's like cold, cold, cold now.

Peyton had an ortho appointment this morning.  They put some chains on and now he has black bands on his braces.  He doesn't have to go back for another eight weeks.  We did our stop at McDonald's tradition.  He had a sausage mcmuffin, hash brown and chocolate milk.  He tried to stall as long as he could before going to school.  He's doing well this year, expect in Career Explorations.  It's because he dislikes the teacher.  He had a lot of issues with her last year at the Sixth Grade Academy.  Last night, we worked on his missing assignments.  We got 3.5 done because he said he had already done the part of one with a partner during class.  We have three or four more  to work on this weekend.  ﻿ 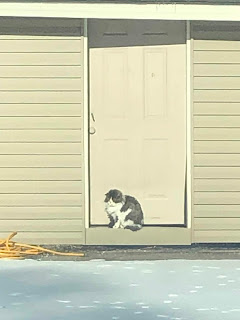 I stopped by my house before heading to work and I found this little kitty hanging outside my shed.  Apparently, it lives in my shed.  I think it's my neighbors cat because he told me he kicks his cat out of his house sometimes.  It's 12 flipping degrees out!  No need to kick the cat out.  Should I put some food and water out for him?  I don't want him peeing in my shed though.  That's the only thing I am concerned with.  If he needs a warm place to sleep, my shed is the place.

It's going to be a busy weekend coming up.
Peyton and I need to finish putting his new desk together and go through all his old stuff.
The Fountain City Coed Game day is Saturday, I'm not playing, but I'm coaching and volunteering.
Sunday is jammed full of fun things.  Team breakfast in the morning, practice, shopping for the Ronald McDonald House and then preparing and serving a meal at the Ronald McDonald House.  I'm excited about that, I haven't done it in a while.  I asked my mom to go see a movie Saturday during the day, but haven't heard from her yet. 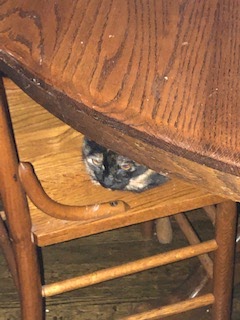 Maggie's new hiding place.  I am going to sell this table.  I don't like it and it doesn't fit well in my dining room.  I need a square one.

What's going on this weekend for you?

Posted by Morgan Cartwright at 3:41 PM