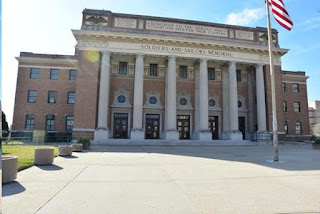 Friends!  Long time, no write!  Last week was bananas.  I know I posted a few times, but I feel I was slacking.

I have a real life scary story that happened last week!

The derby league practices and plays at Memorial Hall in Kansas City, Kansas.  It’s a beautiful, historical building.
One evening, it was my day to open the building up for practice.   I was there early, so people could come and practice their minimum skills test items.  I was the first to enter the building.  When I entered the alarm should have been set, but it wasn’t.  The building was unarmed.  It’s happened a few times recently, I just suspected that Memorial staff had been there earlier and they knew we were coming.  I walked to the big auditorium.  All the lights are out and it’s dark in there.  I started hearing something make noises and garbled voices.  I shouted “hello” into the darkness, because, you know you’ll get a response if someone broke in and such.  I put my derby bag down, but kept my keys and phone with me to go turn on the lights and unlock the back door so people could enter.  The chairs that we keep in a line were strewn and there were medical gloves on the ground.  Weird.  I picked the items up and put the chairs back where they were supposed to go.

I unlocked the storage closet and went back upstairs.  By that time, one of my league mates was texting me, asking me if I was already inside.  She was in her car and a creepy person was hanging around her car.  She drove up to the driveway (we normally do not park there) and entered the building.  She thought he was on something as his behavior indicated that and she didn’t want to take any chances.  I told her about the strange noises and told her I was glad she was there. 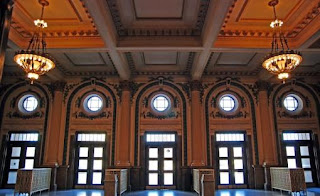 Nothing else happens during practices because we have around 100 people there.  After regular practice, we have an hour for advanced skills.  Only eight of us stayed for that.  Practice went well.

Afterwards, we all geared down.  I went to go start shutting everything up.  I was getting the lights turned out when the group came up to me and one of the girls said she saw someone in one of the locker rooms.  We went to investigate, but did not find anyone.  I had already shut down the lights, so it was hard to see.  We moved on and I was locking up the storage closet with two of my league mates, at the same time we all heard something come from the locker rooms.  It was barking like noises and came from that hallway.  We are in the basement and all the doors were locked and there are no windows to let sound in.  All three of us looked at each other than bolted up the hallway.  One of the people decided to be brave, then thought the better of it.  We all grabbed our things, got outside, and called the police and the building manager for Memorial.  The police and the building manager both arrived at the same time.  I let them into the building and they investigated.  We just followed them, squished in between the officers.  We checked all spaces and places in the lower level and entry level (the top floor is armed and if anyone was up there, it would set off the alarm) and NOTHING!  It was guessed that the intruder escaped out of the north side doors.

After all of that, we locked the doors, set the alarms and we left. 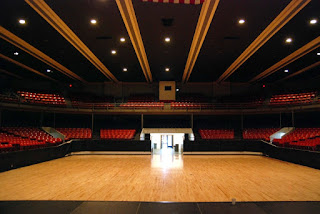 I made a post on our Business Page stating to never be alone in the building and always have a friend when going places in the building alone.  Not to scare anyone, but to make sure people are safe.

Someone commented that their child was down in the locker rooms during practice.  Teenage introvert that had headphones in.  That explains one thing, but doesn’t explain the barking noises, three of us heard.

Our conclusion, it’s a ghost.

Memorial is known to be haunted.  They do ghost hunts there.  Patsy Cline is one of the suspected ghosts.  Memorial Hall was the last place she performed before dying in a plane crash.   Memorial staff even thinks she comes and visits.
Now, I’m terrified to go downstairs in the dark, even with a friend.

Do you believe in ghosts?  Do you have any ghost stories to tell?


Posted by Morgan Cartwright at 9:53 AM