I realize, I only took three pictures this week.  Two of my cat Fred and one of the fall decor I put together in an old crock.

Hybrid schedule has been miserable for Peyton.  I tried to move him to online learning, but the school district said it was too late and they would only move him if someone in our family has a compromised immune system.  We are all healthy.  I talked to the counselor and asked her to talk to him and counsel him.  She pulled him in and just told him that I tried to change him to online school and I couldn't.  She didn't counsel him or help him.  Ugh.  I'm trying.  I'm not complaining about things, just trying to find a solution that works for Peyton and his schooling this year.

Hybrid schedule means he goes 2-3 days a week.  When he does go to school, they walk in, get temperature checked, go to their Advocacy classroom and sit in the same classroom for eight hours.  The school informed me that they are allowed to go outside to the brand new multi-million dollar stadium that has never been used for a game for fresh air.  Peyton thought he would, at least, get to see his teachers.  He doesn't.  They are sitting in different classrooms, with their own advocacy classes, teaching their classes online.  He is in PE and Automotive Tech.  Those are not online classes.

There was a league meeting for KCRW.  Online, of course.  We were warned that leadership was going to get ambushed.  It wasn't as bad as expected, but we were still told we aren't doing enough.  That feels great.  I love working my ass off for free and being told I don't do enough.  There is a lot going on in the background.  Getting things set up, trying to figure out what we can and can't do according to WFTDA, State, County and City guidelines, keeping track of COVID numbers, to see if we are to the point where we can practice again.  It's exhausting.

Does anyone else get an absurd amount of junk email that they miss the important ones?  I have someone else that uses an email address similar to mine and I get their email all the time.  I've gotten their lease agreement, doctors bills, closing info from a realtor.  I feel like it's more than one person that has a similar email address to mine because some of the stuff is from the TX/OK area and the other stuff is from the SC/GA/FL area.  Like they all move around a lot.  I've even gotten paypal payments from people I don't know.  I'm assuming going to one of these other people.  This week I've gotten a Tallahassee Pediatric Dentist online portal invite and a Cherokee Nation General Practice invite.

We made some of our staple dinners this week: Chicken Tikka Masala with Naan, Hamburgers and Chicken Noodle Soup and rolls.  The rolls I buy are Peyton's favorite.  They are just the dinner rolls that come in a bag frozen.  You take them out and put them in a pan and they unthaw, rise and get very large before cooking them.

I bought two plants:  Pony Palm and a Pink Nerve Plant.  Both are animal safe.  I need to repot both of them.  Right now, they are chilling outside for the sun. 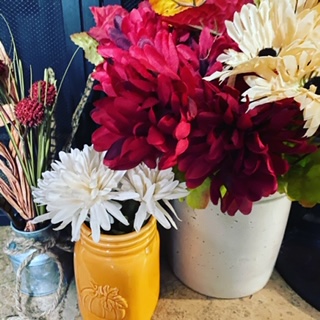 Just some of the things I put together. 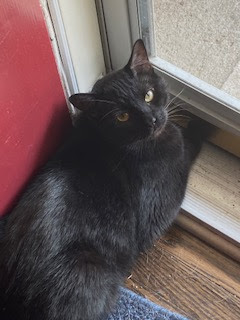 Fred likes to escape out the door.  Sometimes, I let him wander with a watchful eye.  This morning he went further than he had before. 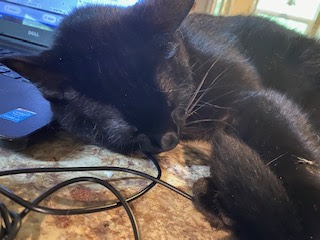 He tells me I don't need to work as much and slept partly on the mouse and keyboard.  I love this cat.

Posted by Morgan Cartwright at 8:09 AM