#atozchallenge : M is for Movie Conversation


Damn the Man, Save the Empire!

High Roller: That's an 18,000 dollar bet, you sure you know what you're doin', kid?
Lucas: I know this, that if I win this roll, I will save the place that I work from being sold, and the jobs of my friends that work there. Thus striking a blow at all that is evil and making this world a better place to be in.
Lady at Craps Table: Huh?
Lucas: ...And I'll buy you guys a drink. [Lady smiles]

When Lucas loses all the money at the beginning of the movie.  There is an extended scene that shows a lot more of this.

When Joe asks where all the money went..


Joe: Where's the money, Lucas?
Lucas: Joe, the money is gone.
Joe: I know it's GONE, where's it gone to?
Lucas: Atlantic City.
Joe: Atlantic City. ...Is it coming back from Atlantic City?
Lucas: I... I don't think so.
Joe: What's it doing in Atlantic City?
Lucas: Recirculating.
Joe: Recirculating?
Lucas: Yeah.
Joe: Lucas, listen to me. I told Mitchell Beck that you forgot to deposit the money. I told Mitchell that the money was still here.
Lucas: Joe, that's not true. It's in Atlantic City... I swear!
Joe: Shut up, sit down, and don't you move.
Lucas: It could be in other cities by now...
Joe: Oh, shut up! Under no circumstances do I want you to leave that couch... unless it's to get me $9000, and then you bring it here to me, okay?
Lucas: Okay. You know, I think things are gonna be all right now, Joe.
Joe: Oh? And what makes you think that.
Lucas: Who knows where thoughts come from? They just appear. 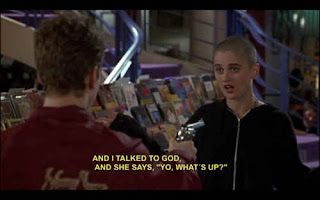 Warren: Old enough to kick your butt through your skull and splatter your brains on the wall.
Joe: Yeah, he's a juvenile.

Warren: Who glued these quarters down?
A.J.: I did.
Warren: What the hell for, man?
A.J.: I don't feel that I need to explain my art to you, Warren.

Jane: What are you doing later?
Joe: I don't know. I'm either going to jail or hell. I can't decide.

Mark: Hey, Lucas. I’ve decided I’m going to start a band.
Lucas: The first thing you need is a name. Then you’ll know what kind of band you’ve got.
Mark: Right, right. I was thinking about, um, Marc. How does that sound?
Lucas: Is that with a C or with a K?
Mark: Well my name is with a K, so I was thinking my band’s name could be with a C. That way it’s kind of that psychedelic, you know, trip thing.
Lucas: Always play with their minds.


Lucas: Joe, is it O.K. if I leave the couch? ‘Cause I’m gonna leave the couch now, okay? My ass is falling asleep, so I gotta go. I’m leaving.
Posted by Morgan Cartwright at 2:00 AM

Email ThisBlogThis!Share to TwitterShare to FacebookShare to Pinterest
Labels: a to z challenge, a to z participant, blogging from a to z, empire records, m