The first day of school has come around here!  It wasn't terrible.  Back to school shopping was easy.  Peyton found two pairs of jeans that he liked and a pair of shoes.  I got some athletic pants for him and he only wanted t-shirts in gray, white, blue and black...no writing on them.
He only needed a few school supplies; two comp notebooks, some regular notebooks, pens and pencils.  As you can see, he in no one wanted to smile for me.  It looks like a mugshot.  It's his last year of middle school!  On to the Eighth Grade journey.  I am happy he doesn't hate his classes. 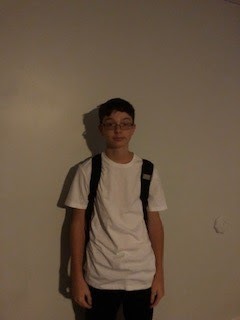 Buster wanted in on the fun and you can see Peyton is kinda smiling at him. :) 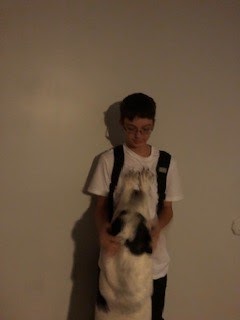 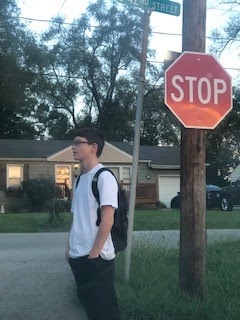 Alli had fun shopping.  We went to Target, Marshalls and Plato's Closet to get her clothes.  She was spending her own money and was able to get a lot of things she liked at Plato's Closet.  We got her backpack at Marshall's and she picked up a few non-school things there also.  Our shopping day also consisted on Jack in the Box for lunch and we went to see "Scary Stories to Tell in the Dark".  It was so good.  I expect a sequel with how it ended. 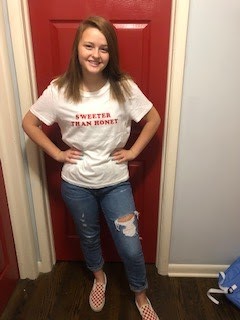 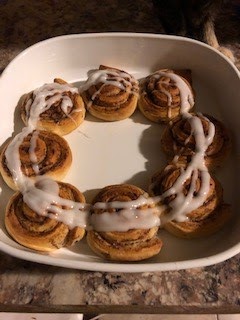 Buster was missing his boy and hanging out on his bed.  I was washing his comforter at the time.  Buster likes to unmake the bed and put himself under the covers. 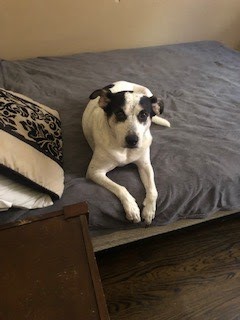 How was everyone else's first days?

Posted by Morgan Cartwright at 8:05 AM