Belvoir Winery is one of my favorite places in Kansas City to visit.  Honestly, I wish I could visit more often.  If I ever get married again, this is the place I would want to have the party at!  (And what am I talking married?  Haha. I haven't had a significant other in five or so years, but that's another story entirely)

Below is the one of the two pictures I took all night.  I wanted to be in the moment and enjoy things and experience all the fun.  My phone was away and I only checked it during the break time to make sure the kiddos were okay.  They were, they were both hanging out with their step siblings. 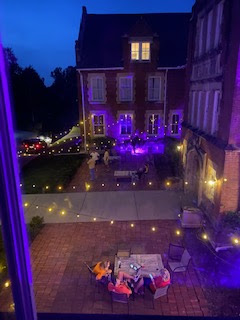 A little bit about Belvoir.  The property has been host to many things in it's life.  The International Order of the Odd Fellows owned the property for a long time.  They had a hospital, old folks home, an orphanage and school at one time there.  I will get a little more into the history when I talk about the different places on the property.  I'm splitting this post into multiple parts because it might turn into a long post otherwise.

Why were we there?  My sister and I had been wanting to do a Paranormal Tour for a while.  After looking at Belvoir's calendar, we found a date that worked and wasn't sold out (yet).  We booked our tickets right away.

The Paranormal Tours are hosted by a local ghost hunting group called Paranormal Research Investigators.  I tried to find a webpage for them, but all that came up was their facebook page.  But it has a pic of our cute baby opossum friend!

We arrived at Belvoir at 7:30 pm.  Signed our waivers and wandered around for a bit.  The program started at 8 pm.

We gathered in one of the smaller ballrooms at the end of the hall.  There were four rows of chairs and each row was a group.  Each group went to a different place and after about 50 minutes, we can back, de-briefed and then headed out to the next adventure.

I was in group two with my sister and brother in law.

They did start the program promptly at 8 pm.  Not everyone was there when we started and didn't even know about those people until break time.  I appreciate groups that take our time and money as valuable and don't wait for stragglers or running late people.

My group consisted of myself, my sister and my brother in law, a bachorlette party and a mother/daughter duo.  Not too bad.

I want to preface that I am came into the skeptical and with an open mind.  I didn't have any notions of what would actually happen.  I just knew this was something fun I wanted to do.

We had three investigator leaders.  All of the investigators are volunteers.  They don't get paid for this, I am guessing they probably pay in to be a part of their group.  (Like monthly dues and such).  I feel horrible, but I can't remember their names.  I'm usually really good with names, so it's going to bother me until I figure it out. :)

Our first location was the Old Folks Home.  We went through one building and up the stairs.  The building is shaped like an H.  I found this old pic of it online.  We were in the long hallway down the center. 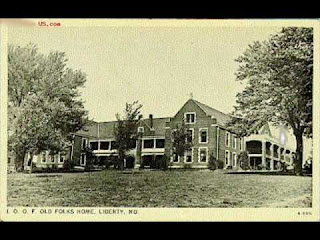 We stopped at the beginning of the hallway and he explained what some of the rooms are.  On the end rooms, they were padded and used for patients with Alzheimer's or Dementia when they needed a quite safe place to go.  They weren't locked in there, but were given the opportunity for quiet time.  The rest of the rooms were patient rooms.  What was left in the rooms were the original items and things, but there have been a lot of vandals since it shut down.  Which is sad.  History is important!  Stop defacing it with your spray paint and need to knock things over and kick it.  And breaking windows! Stop that stuff!   We were warned not to go in the rooms more than a foot or two as the floor was soft and could break through.  There were a few soft spots in the hallway and you could feel them and avoid easily.  My sister, BIL and myself were at the very far end of the hallway, where the other part of the H intersected.  Our lead investigator told us most of the activity occurs within the doorways.  I stepped inside a doorway.  My sister and BIL were the end cap to the hallway.  All lights were turned off to adjust for night vision.  It takes 4-5 minutes for your eyes to get used to the natural light.  The other investigators set up a few flashlights and a K2 meter.  The flashlights are set up where it is just disconnected from the battery.  What is believed to happen is that if a spirit or ghost gets close enough, the circuit is completed and the flashlight turns on.

We did get flashlight activity, but it wasn't when they asked them to do it, it was just when we were having normal conversations that the flashlights came on.  No one was near the flashlights.  They were at the opposite end of the hall and the middle of the hall.

There was an Ovilus going.  An Ovilus is a deceive that has a dictionary in it. The spirits are able to pull words and they appear on a screen.  We did get a few hits on that.

Remember that mother/daughter duo in our group. Well, the mother had an app on her phone she wanted to try out.  Guess what happens when you light your phone screen!  You lose your night vision.  Okay, okay, I thought, she is here to have fun too, so it's fine.  She turned on this app and I think it was called like necrophone or something like that and works the same way as a spirit box, but on your phone.   It sounded like a few things picked up, but I am really skeptical on that device and took it with a grain of salt.  He did ask her to put it away after 10 minutes, so we could do an EVP session.  The EVP session picked up nothing.

After the EVP session was over, I was still standing in the doorway, I heard a long scrap along the ground.  Of course, I turn around expecting a little animal critter or something, but nothing.  I backed away and just looked in the doorway.  They brought the EMF reader over and nothing was captured, but on the Ovilus, the word "around" came up.

Our time was about up and we made our way back to the ballroom to change areas.  I was talking to my sister and BIL and asked them why they had their backs to me the entire time.  They both said something was staring at them from the other hallway and they lost track of it for a few minutes and that's when I heard the scrapping noise.  They both had started laughing when it happened and they told me because they thought whatever it was decided to mess with me for a minute.  The hallway did have a door leading to the room I was in front it.  But do spirits really care if there are doors or not?

I do want to bring up daughter of the mother/daughter duo.  She really wanted to see something.  She would see something after the investigator brought something up.  She said at first she saw a black shadow figure, then it changed to white when the investigator told her of his experience (The mom saw a black figure).  After a story of a red orb was told, she was like OMG, I saw one!  I feel like she wanted the experience so bad she either manifested it or experienced paradolia.   Maybe she did she something.  I don't want to discount anyone's experiences.

I am going to embed a youtube video that was recently released.  I found this after our experiences because they had a sign up for it in the winery part.

This might turn into a three or four part series.
Posted by Morgan Cartwright at 4:00 AM