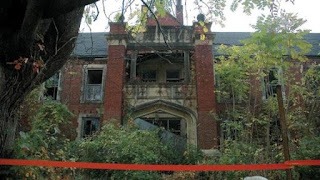 This post is going to include the next three places we went:  the hospital, the bunker and the morgue.

After our debriefing, my group headed to the hospital.  It was the same group.  The mother/daughter duo and the bachelorette party.

We had to walk a little bit to get there.  The nature sounds were awesome and it sounds like my front yard in the morning and at night.  Even during the day sometimes.  I love it.  It gets so loud sometimes.

This door in the back is where you enter the hospital.  We were told to watch the poison ivy and the hole there.  Once inside, we gathered in a room through the stairwell to the left.  It was a fairly large room with brand new graffiti, so new you could smell the paint. Someone put a lot of time into it.  Todd and Trevor were our investigators this time around.  They are a father/son duo.  The son is in his late teens and attends a local college.  The father has been doing paranormal research for a long time and Belvoir is his main haunt.

Todd told us a little history about the hospital.  It is always said that it was an asylum.  I mean, even Ghost Adventures called their episode about it, "Odd Fellows Asylum".  It was never an asylum.  They did house a few psychiatric patients when the Glore Psychiatric Hospital was full.  It's funny how the "best" researched TV shows could make that kind of mistake.  Anyway.  He told us there were patients from the war, patients from the surrounding area, etc....a regular hospital.  Well, a regular hospital that the halls were way too narrow and it was hard to get anything transported anywhere quickly.  The hospital was actually the only one north of the river (if you live in the KC area, you know what this means) until the North Kansas City Hospital was built.

He told us about a German solider that likes to hang around on the second floor.

We made our way down the hallway to the 'Surgery' room.  It was a large, open spaced room at the end of the hall with noisy ceramic tiles that made a ton of noise when you walked on them.  The mother of the mother/daughter duo wanted to try out her app again....yay!  Sarcasm overload there.  We did that for a while and got a lot of voices and a lot of different people.  The Ovilus was also running.  Trevor was in control of that.  There were flashlights set up.  No flashlight activity at all.  About twenty minutes in, the motion detector did go off in the hallway that was vacant.  The Ovilus was picking up a few words here and there.  The daughter of the mother/daughter duo got touched.  She said it touched her back and a cold spot spread throughout her entire back.  Before long, one of the bachelorette people also got touched.  She said it was someone grabbing her hand.  From the lady's app, it was a spirit named Mike and he was not sorry he touched her, but would not do it again.  I wasn't feeling it so much in there.  It didn't have a lot of energy.

After our time was up, we walked out and saw the staircase that the Ghost Adventures guy supposedly lost hours of time.

We went back and debriefed and they were telling of their experiences.

Our group headed to the Bunker next.  Our investigators were Nick and Jen and Jen's son.  I could not remember their names in the previous post, but they came to me this time. :)   It's a small building behind the Old Folks home.  It's all white and looks like a bunker.  It was used for storage (still is) and the orphans used to go play in there.  Orphans aren't the only thing that plays in there.  There was a mama opossum hanging out too. 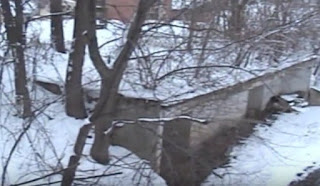 Found a pic of it at onlyinyourstate

When we got there, we all gathered around and there was a knock on a wood door that was leaning up against the wall.  Actually, two quick knocks.  No one was by the door, so it was kinda creepy.  Nick had set up flashlights away from everyone one and a few motion detectors scattered around the room.  There were also a lot of toys already there for the orphans to play with.  He brought another one to put down.  It was a cat toy and it lights up when it is moved around.  I was thinking that would be a cool thing to get my cats.

While he was setting up, a TV reporter and videographer from the local news channel came in.  They were going to record our time in there.....

We went lights out and nothing happened for a while, other than that knock at the beginning.  A lot of people sat on the floor to be closer to the spirits.  They were told it is easier for them to contact people that way.  I did not sit on the floor.  My sister and brother in law did not either.

The motion detector and EMF reader started going off on one side.  They went off and nothing really happened again.  Jenn started playing children's music on her phone.  They seemed to enjoy that and lite up one of the flashlights across the room, where no one was.  Also, as the song was ending the EMF reader went crazy, so she played another song.  This time, one of my fav Halloween songs, "This is Halloween"  It's just super cute.  Well, the ghost really enjoyed this one.  Lit up the EMF readers, the flashlights, motion detector and even the cat ball.  Haha.  I love that cat ball.

Nothing happened for a while, we were standing there and we heard some scratching noise.  Guys, it was a little baby opossum in the wall!  OMG, he was so cute!  I guess, the ghost thought so too, every single thing went off and lit up the room.  It was like an overhead light was on. (There was no electricity in the bunker.)  The camera man rushed over to get the video of our little friend.  Will that be the highlight of the footage once it airs? :)

After that, a few more EMF readings went up and the K2 detector sensed a little.  Oh, and one of the bachelorette girls got touched on the knee.   It was getting a little boring and repetitive, but I think the cameraman got some good stuff!

Our last destination during the regular rotation was to the "Morgue".  It's in the basement of the Old Folks Home.  We had just heard that the previous session had a lot of stuff going on.  Like crazy sounds and motion detector and Ovilus.  One of the investigators yelled at something on the stairwell... 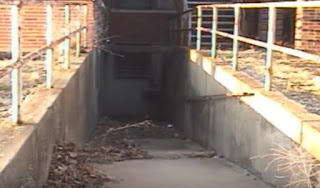 We had Todd and Trevor again.  We made our trek to the basement and it was just a basement.  Not actually a morgue at all.  It is called the morgue because when people passed in the old folks home, they would put them in a large room down there until the funeral home could get there to retrieve the body.

The basement housed the kitchen and a lot of it was still intact, even if it was damaged by vandals.  There was the laundry facility.  Those washer and dryers are so big.  I could wash all our clothes in the house at once in them and have extra room.  There was a large bathroom facility.  Storage rooms that still had some of the supplies, like plastic straws and plastic serving ware.  They also had large kitchen supplies.  One room was sad.  This room is where they put all the belongings of the deceased.  It had their suitcases and anything they had brought with them.  This room was completely wrecked by vandals.  Suitcases torn open, clothing everywhere.  A few shirts were still hung up and some shoes lay on the rack.  The type of clothing broke my heart.  It is exactly what you think an elderly person would wear.  Flowered dresses.  Flannel button up shirts.  Suspenders.

The bachelorette girls were freaked out from the get go.  Honestly, I didn't feel anything.  It was a cool place to explore and I wish the vandals had never become vandals down there.  So, the girls kept flipping out over nothing.  The motion detector went off a few times on the stairs, but that was it.  Nothing happened.  The energy was all gone from whatever had happened in the previous section.  We stood around for a while trying the devices.  My sister and I asked if we could explore the rooms some more, Todd was cool with that.

After this was over, we headed back to the big room as the large group.  Todd did give us some advice.  Pick the smaller group in the next go round.

Also, the bachelorette girls did not stick around, they took off after the morgue adventure.

Only one more part to go and it's my favorite of them all!

** The pictures are not mine, I have linked to where I found them.  I only took two photos all night.

Posted by Morgan Cartwright at 12:00 PM