#atozchallenge : H is for Holiday

Holiday as in a day recognized by custom or law or as in vacation?


I get a lot of holidays off being a government employee.  There are a few that I get off that no one else around does.  My favorite is Truman Day!

Only government employees for Missouri are given this holiday.  It's written into the state constitution and it will take an act of Congress to have it removed.  This year it is on a Tuesday, so we will have a Monday, then second Monday that week.

So, how does one celebrate Truman Day?  Do you even know what Truman Day is?

May 8, 1883 was when Harry S. Truman was born in the small town of Lamar, Missouri.  Lamar is close to Prairie State Park, which is an awesome place to hike and see bison.  Truman served in the Army during World War I, worked in retail, was a judge in Jackson County (the county I work in), was Vice President for a short stint then became President when FDR died in 1945.  He was elected President in 1948.  Not Dewey, Dewey didn't win.  Despite what the paper says!  Fake news! 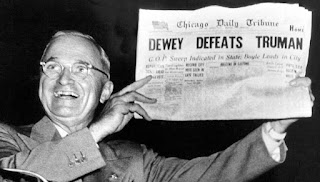 Missouri made Truman Day an official state holiday since he is the only Missourian to ever be elected President.  Truman is my favorite President just for this reason.

So ways to celebrate:

Visit the Truman Library, it is located in Methdependence, opps, I mean Independence, Missouri.  You can pay homage to him at his gravesite.  I've never visited.  Maybe I should put it on my agenda for May 8th.

The Harry S. Truman Historic Site is also located in Independence and is ran by the National Park Service.  This is his home.  Maybe another item for the May 8th agenda.  I do have a National Parks Pass and would not have to pay the access fee.

Truman also has a whole lake named after him!  Lots of fishing, camping and hiking to be had there.  The Boy Scout camp is located on Truman Lake.  Truman lake is connected with the Lake of the Ozarks.  The lakes remind me of dragons.  Just look at a map of them.  Harry S. Truman State Park is also located around these parts.  I have never been, but it looks like it could be a fun camping spot for a weekend.

Occasionally on the blog, I make a list of "different" holidays.  What is your favorite holiday?  How would you spend Truman Day if you had it off?


Posted by Morgan Cartwright at 2:00 AM