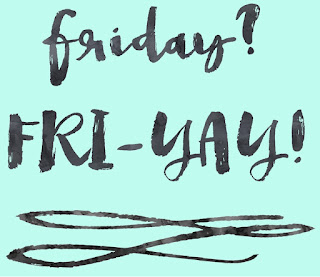 This week, we've stuck to our meal plan!  We held strong and did not go the fast food route.
What did we eat?
Sunday: Cheddar Potato Soup and Cheddar Bay Biscuits
Monday: Chicken Tikka Masala and Naan Bread with some Jasmine Rice
Tuesday: Steak and fries
Wednesday: Sriracha Shrimp Quesadillas
Thursday: Enchiladas
and tonight will be Toasty Meatball Sandwiches!

I have a little story about the Sriracha shrimp.  I like to make things on the cast iron skillet.  I put the shrimp on the skillet then added garlic and sriracha to them and I finished cooking them.  I removed them from the skillet, but there was still sriracha on there.  I went to start making the quesadillas, turned around and inhaled sriracha smoke.  It had gotten a little too hot.  That hurt my lungs.  It hurt to breathe for a while and I couldn't stop coughing.  My daughter had to cough a little too.  AND THE CATS!  Two of the cats started coughing.  I put them in my bedroom downstairs, kept the dog in another bedroom and my daughter and I aired out the house.  All the fans and vents were on.  Everything ended up being fine and the quesadillas tasted spicy and amazing.  My only advice is not to inhale spicy sriracha smoke...it hurts.

I made an appointment for my eyes and my primary care.  One is in February, the other is in March.  Have to spread them out since I'm currently in the "deductible" phase of my insurance.  But, I will get money from AFLAC for the appointments.

This week I received my Grove.co order.   I love this company and their personal touch on items.  Interested in trying it out?  Use this link to get FIVE free items! 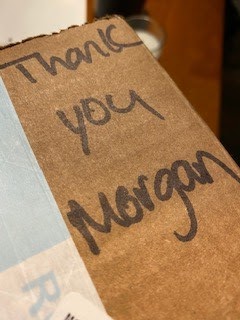 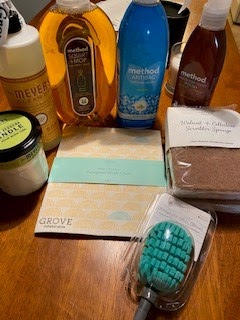 We, also, received our Chewy package.  All the mammals have food for the whole month now.  I have to figure out where to store it.

Each morning this week I've woken up with a different pet in my bed.  I got Maggie on Monday, Freddie on Tuesday, Buster on Wednesday and Kibben on Thursday.  Kibben is the cuddliest one of all.  He likes to be right on your chest and purr, purr, purr...  How Buster was sleeping is the first pic and the second pic was when I had to wake him up. 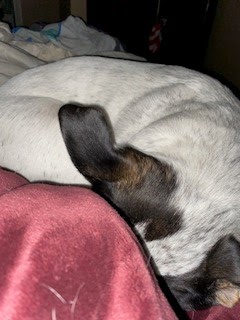 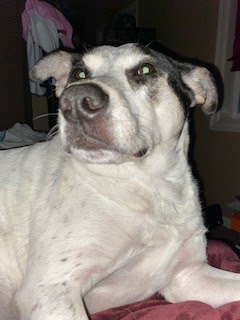 I attended one practice this week.  It was scrimmage, then All Star practice.  I missed practice on Tuesday because I had stuff to get together for the game on Saturday.  I did work out at home.  Buster helped by laying in the middle of the floor, chewing on his rope.  He tried to jump on me multiple times.  I had just cleaned the floor too, so he needed to get his dog hair added back in. 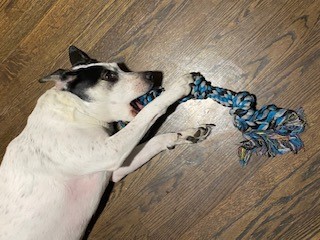 Speaking of this weekend...we are supposed to get a gigantic snow storm.  PLEASE KEEP YOUR FINGERS CROSSED THAT IT DOESN'T HAPPEN!!  :)

Peyton had something happen to him on Christmas Eve, so he had a follow up thing he had to do with that.  It's not medical, it's just something that happened that involved police.  He ID'd both of the guys out of separate line ups.   Peyton is fine and I guess the detectives are doing their jobs.  After everything is over with, I'll write about what happened.

How was your week?  What did you do?
Posted by Morgan Cartwright at 3:30 AM