It's Friday!  My favorite day!  I like to spend Fridays talking about my week.  I want to remember the good.  Sometimes I talk about the bad or ugly, but I'm not so sure I want to remember that as much.
Monday was a holiday.  The kids were out of school and I was off of work.  Alli and I went grocery shopping.  This was also the day we cleaned out Peyton's room.  It looks so nice now.  We do need to get a curtain rod, I had gotten him some nice curtains that match his sheets.  I do need to get him a new comforter.  Maybe I can get him to go shopping with me to find one?  Kibben helped me make his bed.  He loves getting under the sheets while I make it and then popping out once someone gets into bed.  Buster enjoys the heating blanket in the bed.
We went through all his clothing and have a large pile to take the donation center. 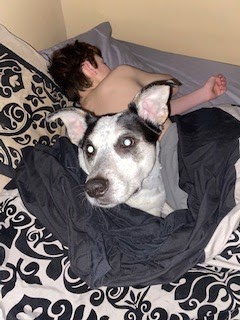 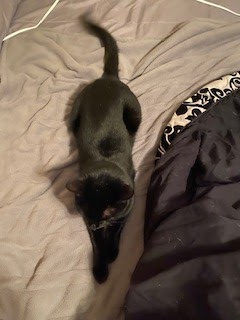 Tuesday -- After I had already arrived to work, I got a text (I was still in my car) and was asked to cover one of our other offices that morning.  The boiler was broken!  It was 55 degrees in the office.  Which the building manager said was fine to work in.  We were all wearing our coats and gloves though.  When it's only 9 degrees outside, it would be nice to go into warm office.  Maintenance did get the part to fix the boiler, but by the time I left at 12:30, it was only 61 degrees in there.  I finished out the day in my normal office and worked on my presentation for the interview that I have on Monday.  Tuesday was a practice night and setting up for the game on Wednesday.
Look at Freddie.  He loves to cuddle on my bed.  And yes, I watch movies on my laptop in my bed.  It seems to be the only way I can fall asleep at the moment. 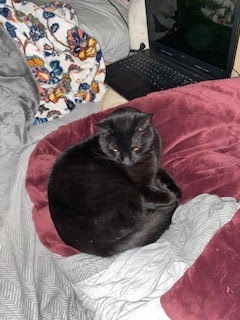 Say hi to Maggie!  She was underneath the TV table.  Yes, there really is dog hair there.  Buster is shedding like nobodies business right now.  Hair is everywhere!!  But Maggie is cute. 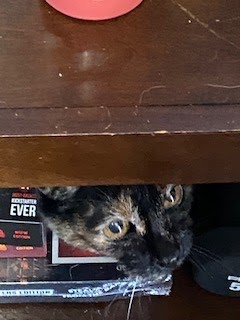 Wednesday morning was supposed to start with a meeting, but it got cancelled.  Wednesday afternoon was supposed to be training, but it got cancelled.  I've been scheduled for this training for six months.  They said weather was the reason.  It was raining and snow mix all day and above freezing.  The roads were fine.  Work was steady.  I had my friend emailing me back and forth perfecting my PowerPoint.  I submitted it on Wednesday, a day early.  Hopefully, that shows something.  The game happened.  It was a smaller event from when we canceled the large event.  I was so lucky to get all of our vendors rescheduled for both dates.  It went well. We had about 100 people in attendance.  (good for a Wednesday night game!)  I got a massage from one of our sponsors.  I need much more than 15 minutes though. :)  I got pulled pork nachos from one of our vendors, they were delicious.  We still have All-Stars practice afterwards and it was fun and tiring. I still didn't fall asleep until 1 am though.   I'm on a non-sleeping gig again.  Such irritation.  I think my mind doesn't want to rest.

Thursday was a normal work day.  I was supposed to have training in the morning, but it was the same on canceled from Wednesday.  Alli was supposed to cheer at an away basketball game, but they could not find a bus driver.  It's funny, the old cheer coach was fired because she could not attend the away games.  Well, two of the three away games have been canceled because they can't find a bus driver.  Nice, huh?  Maybe the old coach knew what she was doing?
Have you tried Wal-mart's Deep Dish pizza?  I discovered it a few weeks ago and it is so good.  The kids and I gobble it up.  That was what was for dinner.  It says it's a limited edition on the box and I hope they decide to keep it.

I can't decide what to make for dinner tonight.  I have three choices: Air Fryer Bang Bang Shrimp, Chicken Enchiladas or Cheddar, Bacon and Corn Soup.  I have another too: Buffalo Chicken Chicken.  The choices!  But we have all weekend, so we can have three out of the four.

How was your week?  What did you do?

Posted by Morgan Cartwright at 8:00 AM